If you haven’t already read part one, click here.

I heard someone come in the room a little after noon and recognized my Dr’s pink tennis shoes under the curtain. She checked me and said, “well you are ready to push.”

We were still in shock at how quickly things were going. It felt like we’d just gotten to the hospital. But I started pushing! She sat on the end of my bed and coached me through pushing. My mom and sister were both those “I pushed once and the baby was out” girls. I was not. I think bedrest really affected my stamina.

Chuck had to literally push my shoulders forward, because my abs were so weak. The Dr let me push in the nice delivery room and said we didn’t have to go to the OR until the last minute. After about an hour of trial and error with learning how to push, it was time to go to the OR.

They wheeled me down the hall and whisked Chuck away to get his OR garb. I guess my epidural wasn’t super strong because I was able to basically transfer myself onto the operating table. There was a guy putting sensors on me that I think was part of the anesthesia team. Someone put a lovely hat on me and mentioned something about how it had hippos on it. Exactly the animal pregnant women want to be associated with right? Oh well, we bless them.

There was a good bit of scurrying around and soon Chuck came through the door. I kinda chuckled at his hat and robe. He had the camera around his neck and was all ready to be a dad.

Okay time to push again!! The Dr asked for another nurse to hold my other leg while Chuck and the random guy with the sensors pushed my shoulders forward. My birth was seriously a team effort. Some women hate that there are so many people in a twin birth, but I was actually thankful for all the help!

Chuck counted 12 people in the room at one point.

Not too long after, our Autumn Hope entered the world. She didn’t cry. Of course, I immediately start asking over and over, “is she okay?” I watched them give her oxygen and then she let out a scream. Chuck and I both took deep breaths and shed a few tears. Apparently the cord was around her neck.

With no time to waste it was time to get baby B out. They used an ultrasound to find her position, and the Dr had the nurses put pressure on my tummy to keep her in place. When she went to turn her, she found she had slipped right into head down. Good girl! My babies had been listening to mama in all our nighttime bath conversations. 🙂

Baby B felt much easier in some ways because I finally knew what it felt like to push correctly. With her, I kept saying “can I push?!” In unison, they’d say “YES.” Less than 20 minutes after her big sister, our Charlotte Joy entered the world with a loud scream and outstretched arms as if to say “I’m here everyone!”

She was so pink and red compared to Autumn. Apparently her cord was super short. The NICU asked once when her water broke, and I had no idea. I asked the Dr and she said she didn’t even know. Twin births are are so intense, it can be hard to keep track of everything. 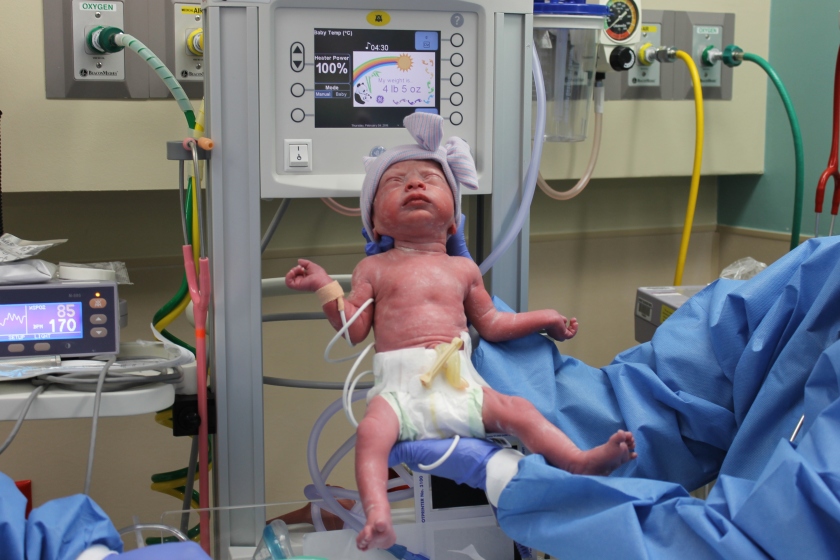 After they weighed the girls they laid Autumn and then Charlie on my chest. Then the anesthesiologist jumped in and started taking pictures of us and the girls. What a gift! She was standing on stools to get shots. It was hilarious! 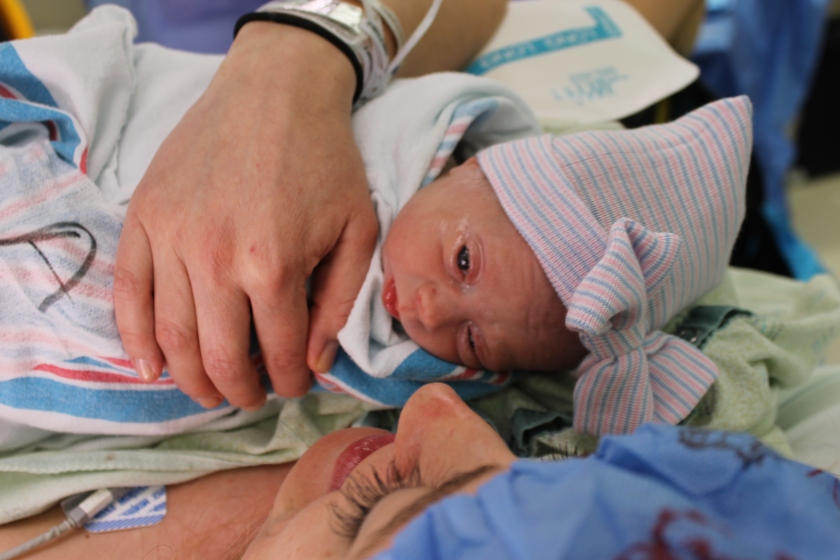 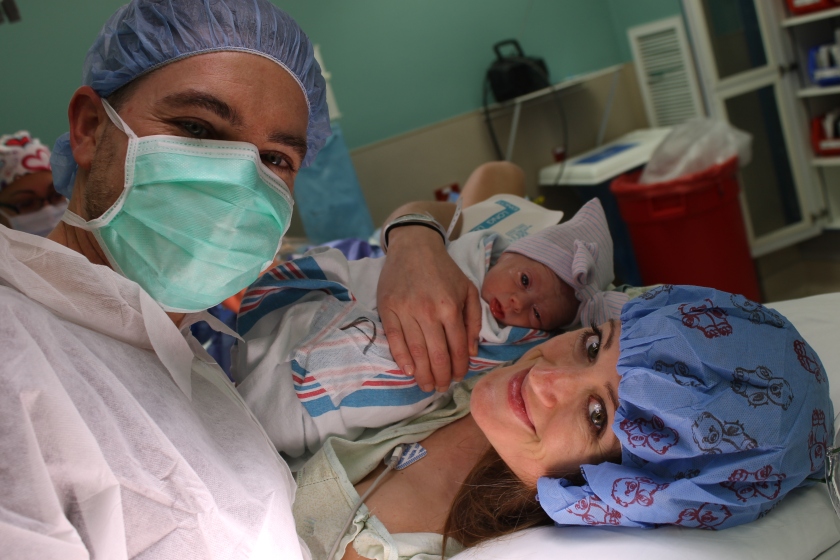 There is nothing you can compare to that moment. Nothing.

My cheesy little babies. They just stared at each other. It was so sweet!

The girls were on the smaller side. My Dr had told me they were measuring small at my last sonogram, but it took awhile for it all to register. Charlie was 3 oz from being able to come to the room with me. They joked that she probably peed on her way to the scale. They even weighed her again in NICU in hopes they could bring her to me. Not having Charlie with us was the hardest part for sure!

After the delivery we went back to the room and Autumn immediately ate like a champ! I was so thankful that I got the delivery I hoped for!

My Dr came in and told me she was proud of me and gave me a kiss on the forehead. A little later, Chuck and my nurse were both staring at me. Chuck was saying did you bust a blood vessel on your forehead while you were pushing. I was so confused, and they were both staring at me trying to figure out what it was. Then eventually it hit me, it was her lipstick!

Ha! I was so thankful for the team of people who helped bring our girls safely into the world.

Later that evening I went to recovery where I had the best night nurses. Since my hospital stay was mostly filled with nursing and pumping we didn’t have much time for visitors but my parents came down from East Texas. It was sweet for them to come and meet the girls!

She was only 4 lb 3 oz at that point but perfectly healthy. I cried so much. I didn’t want to leave Charlie or the hospital especially those wonderful nurses!

We could not get over how tiny Autumn was in her car seat!

We are so thankful for two healthy girls and the countless answered prayers. We are in awe of how faithful God has been to us through this journey. He went over and above, and way beyond what we could imagine with our little double portion.

We may be a little sleepy, but we have never been happier or more thankful. God is good!

I keep replaying their birth over and over in my head. I ask Chuck questions about things that I didn’t know or can’t remember. I never want to forget the experience so I am going to attempt to write the story-

When I found out we were expecting twins, I knew I wanted to attempt a vaginal birth. Obviously it is my first pregnancy and I knew there were more to come. I read every story I could find online to encourage myself that it was possible! Which is part of why I wanted to share my story here. Hopefully it can encourage others in their birth stories.

I found a doctor who would attempt vaginal delivery of twins as long as Baby A was head down.

Fairly early on I started talking to Baby A about being head down, and Baby B to follow sister when she makes her exit. I guess my sweet Autumn listened because at my 26 week 5 day appointment she was already putting pressure on my cervix causing it to shorten. My laid back doctor came into the room and said you aren’t going to like me very much. She put me on strict bedrest immediately. I spent over 9 weeks laying on my sides to keep my girls in as long as possible.

At my 35 week appointment my doctor talked to me about how labor would go, and how we would have to deliver in the OR due to hospital policy. I figured we would. She said it’s ridiculous, and she wished I could just deliver in the cozy peaceful room. She talked us through how the birth would go as if it was totally possible and didn’t even mention a c-section. That really helped me feel more confident about it actually happening! A nurse the week before had given me a long speech about how I’d probably have a c-section and it’s just another exit. She said my body was probably too small to deliver naturally etc. Thanks nurse for the encouragement, I leave that here with you.

So after 9 weeks of doing everything we could to keep them in, at 36 weeks 1 day it was time to let them come. My doctor came into my room and broke my water at 7:30am. I felt nothing at first because Autumn’s head was so LOW. They kept saying she was like a cork keeping the water in. They started me on a small dose of pitocin, and immediately contractions every 2-3 minutes. I knew pitocin was intense so I wasn’t too surprised. 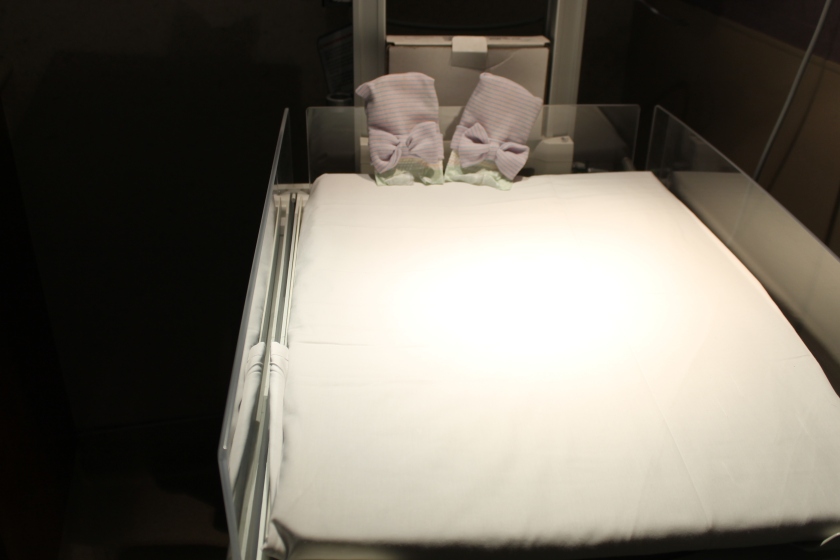 My nurse said I could get an epidural at any point, so about an hour in we called the anesthesiologist. I could sway through the contractions, but I felt it wise to save my energy for pushing rather than muscle my way through the pit contractions. My doctor actually asked me to get an epidural because often she has to go in and manual turn Baby B. Some women say that’s more painful than the contractions. I definitely had no desire to feel that! But to be honest, I think I would have gotten one even with a singleton pregnancy.

By the way, my doctor hand picked my nurse and anesthesiologist, and I was my nurses only patient since it was twins. The anesthesiologist comes in and we chat a bit about how she is from the bay area. She has an assistant who is hilarious, her name was Miley and I don’t think I’ll ever forget her. I guess we bonded when I had to bury my head in her chest while the anesthesiologist inserted the epidural. Chuck went to the other side of the room. Too many husbands were passing out holding their wives, so now you get Miley!

Okay, I am pretty sure I could sell epidurals now, because wow that was amazing. Immediate relief. I crawled back into bed, and Chuck laid on the couch and had a nap. We had worship music playing and Valor in the diffuser. It was this blissful, peaceful atmosphere. 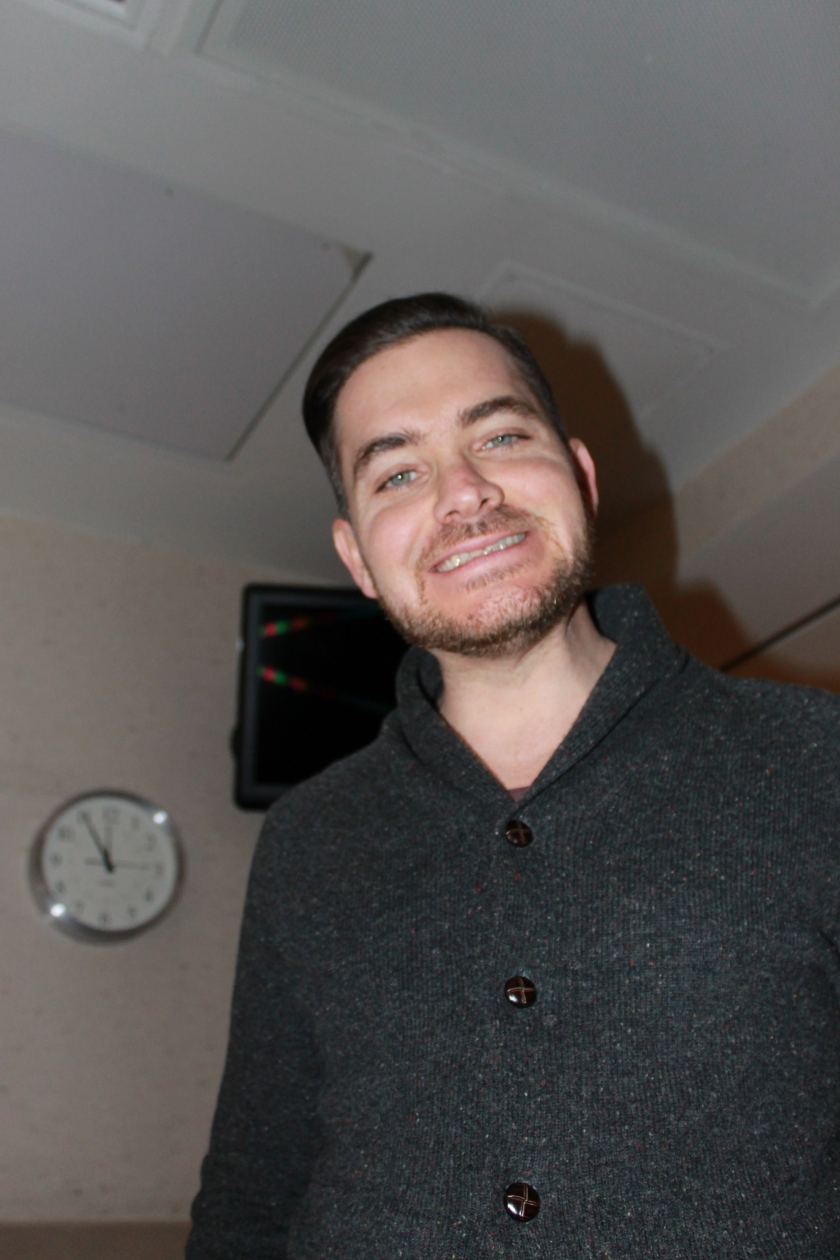 While Chuck was napping the nurse came in and checked me at 10am. Okay another reason I love epidurals. She said you are about a 3, but I think I can stretch you a little. She finished and said “okay now you are a 5-6, just a couple more hours.” I was shocked. I watched a little Gilmore Girls on my iPad and before I knew it, it was noon.